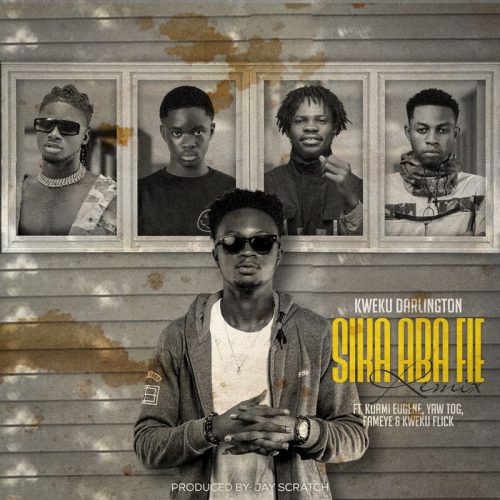 Ghanaian music prospect, Kweku Darlington since the release of his debut 2021 single titled ‘Sika Aba Fie‘ has been ubiquitous on music charts on radio, television and online. The success of the record has earned him the shot to what may be described is an epoch in his music career.

Just a few weeks ago, Kweku Darlington shared an image of himself in the studio with Kweku Flick and Kuami Eugene in an appreciation tweet. Following was an announcement of the remix of his highly acclaimed record ‘Sika Aba Fie’ which he mentioned Kuami Eugene as part of the record.

Keenly awaited by music consumers and critics, Kweku Darlington finally outdoors the tinselled Sika Aba Fie remix which retains Yaw TOG and Kweku Flick whereas welcoming new verses by multiple award-winning Ghanaian singer and songwriter, Kuami Eugene alongside Ghanaian serial hitmaker, Fameye.With most verses in the song taking the form of rap singing, the pattern contributed to the ornamentation of the already beautiful record rendering it ‘a very perfect collaboration and remix’. On the production fronts we have Jay Scratch making sure every element is in it’s right gain.

Ras Kuuku – One Two, One Two (Mad Over You Cover)

Ras Kuuku – One Two, One Two (Mad Over You Cover)