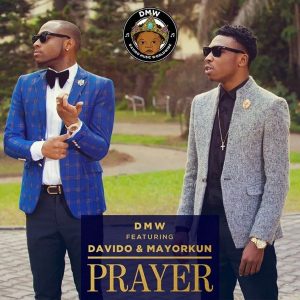 Fresh off an amazing 2016, DMW begins the year with a splendid tune ‘PRAYER’

As announced by the label’s social media accounts, ‘PRAYER’ is a track off the DMW album/mixtape which would be released later in the year. This single features label boss ‘DAVIDO’ & 2016’s biggest breakout star ‘Mayorkun’, Its a follow up to the previously released ‘Back 2 Back’ which peaked at number 1 on the iTunes chart back in May 2016.
As the title implies, ‘PRAYER’ is a very inspirational tune, that sees Mayorkun & Davido display such beautiful synergy you ll see a lot in the DMW album. Audio produced by Fresh Beatz & Video directed by Unlimited LA.. download the audio below