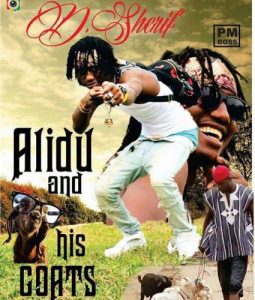 Fast-rising Ghanaian dancehall artiste D-Sherif (PM Boss) is unhappy and irked at someone or some group of people who put him in this state. Before he officially released this tune , he went live on facebook throwing couple of shots to Shatta Wale and his SM Militants with this song playing at the background . From the title , which is Alidu and his goats in this context might be depicting Shatta Wale as the herdsman or Alidu and the militants as goats . D-Sherif might be appearing on the radar for minute with this tune due to its sing-along lyrics and catchy hook . Production credits to LeetyCreation . stream and download the jam below