Star Boy Boss “WIZKID”   who has done major collaborations with the likes of Drake and Sean Paul has announced a collaboration with the world boss and Jamaican dancehall Legend, Vybz Kartel. watchout for this new collaboration dropping soon on your best blog Ghclick.com…..he took to twitter to write and this is what he wrote 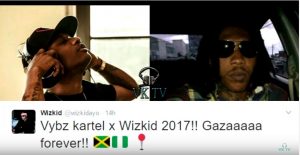