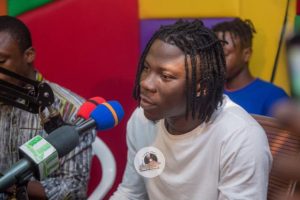 Shatta Wale endorses Stonebwoy’s Ashaiman concert on live radio and promises to attended the event on September 30.In the 4th year running, the International Reggae/Dancehall & Afrobeats Superstar, Stonebwoy, would again stage a mega one at his home grounds, SakaSaka Park in Ashaiman.Over 35,000 crowd came through the 2016 edition regardless of a heavy downpour; it was recorded as one of the biggest outdoor events played in Africa in 2016.Shatta Wale endorsing Stonebwoy’s concert is seen as a positive move by the former, who allegedly has been taking ‘swipes’ at the latter in recent times.Abeiku Santana broke the news on his Drive Tike Show on Okay 101.7fm on Friday, September 15th when he interviewed both artistes. Watch the full interview here on YouTube: