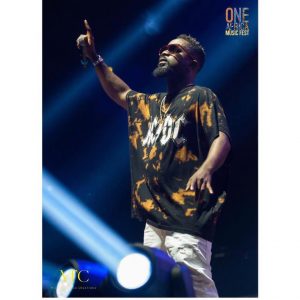 Reports coming from Dubai this morning aren’t all good. First was the reported violent clash between Davido and Wizkid’s camps.

Those who were present also hinted that there was a backstage scuffle between Davido and Sarkodie but the fact is that the Ghanain rap legend was unable to perform.

After the event, he simply tweeted, ‘Sorry to fans in Dubai but I’m not performing. hopefully  make it next time’.

Then a Ghanaian fan who was present at the event tweeted a thread where he claimed that Sarkodie was disrespectd by the organisers which got him quite pissed despite the fact that Sarkodie was at the venue with his Dj on time.

Read his thread below…

Sarkodie will no longer perform because of time constraints.

Banky W started introducing Sarkodie; talked about how he’s the African rap king blablabla, and then he was signaled to introduce Davido rather.
Sad moments, chale

only to find Davido repeat Wizkid’s act. Mounting the stage even without being called. Banky W, the host announced Sarkodie as the next performer while DJ Mensah set up only to be told again that Davido was coming up next. Banky W even seemed surprised.@nydjlive

Sarkodie then felt the turn of events were disrespectful and frustrating”.@nydjlive