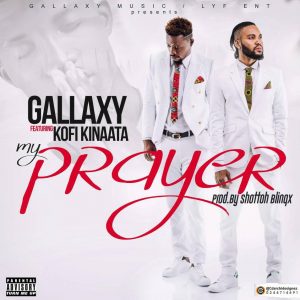 Ghanaian music group,Gallaxy is back with a new Highlife song,’My prayer’ featuring Fante rapper, Kofi Kinaata. The inspirational song carefully woven by Shottoh Blinqx was released under the management of LYF Entertainment jointly with Gallaxy music. According the group who recently broke away from Tema-based Harbour City Recordz,the Highlife song is an answer to fans who has been on their nerves for a while now for more classics. They also added that, over the period,they have been releasing more of Afropop songs and Dancehall-influenced songs but they are back and will give everybody in Ghana and beyond what they truly deserve. The group made up of Bra Chiky and Kwesi Dav is known for their mastery and the new single is just one of such great compositions. ‘My prayer’ is a song which also highlights human beings,wishes and heart desire but because of lack of money,they become dreams that never comes through.