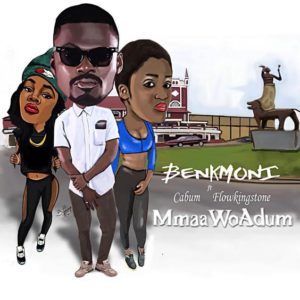 Benk Moni with his Oseikrom brothers; Cabum and Flowking Stone, comes out with yet another street banger ‘Mmaa Wo Adum‘ Produced by Cabum.

‘Mmaa Wo Adum‘ will be be translated “There are lots of girls in Adum” Adum is the central city of Kumasi and one of the most popular cities in the Ashanti Region. This song is actually off a joint project by Benk Moni and Cabum dubbed “KAZINS“.

The upcoming project has been described as unprecedented and the first of its kind! This song will serve as big screen scrolling pictures of how beautiful the city of Adum looks like with the blessings of all the beautiful goddesses.

What you should expect is humour, style, delivery and lyrical smoothness! I love the beat and wondering what the other songs on the upcoming project will sound like. Enjoy this and anticipate for what is coming..download below