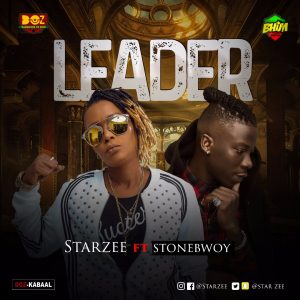 ​ In the midst of all the growing controversy where many headlines held it over the weekend that Beatz Dakay has turned down Stonebwoy’s offer to return to BhimNation, Sierra Leonean Dancehall Superstar, Star Zee, drops her new joint with the BhimNation Boss, Stonebwoy.
“Leader” produced by Beatz Dakay is tipped to be the next big African Dancehall jam. The DoZ Queen (Star Zee) and this BhimNation link will go a long way to cement strong bonds between Ghana and Sierra Leone as both countries already have some historical connections.
QueenKong ‘aka’ Star Zee lyrically has proved herself why she is the biggest Dancehall crooner from Sierra Leone; a lyrically deadly female singjay who matches her male counterparts boot-for-boot on riddim and there wasn’t a single dull moment from her on the song from start to finish. The official video which already began heavy rotation in Ghana (on 4Syte TV, TV7 & others) as well as big rotation in Sierra Leone on AYV TV is due to take over other TV Networks across Africa. cope the banger below