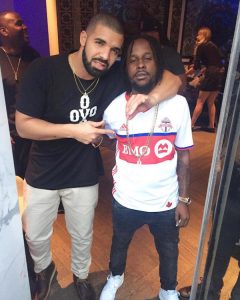 It’s all beginning to make sense now. Apparently, Drake and Popcaan recorded their own version of Wizkid‘s “Come Closer” a while ago, but held it back due to “Come Closer” being lined up as a Wizkid single. Now, their version has leaked online with the title “My Chargie”.
There’s a lot going on behind the scenes, but I won’t say much (in the words of Drake, “Tell me your secrets, I’m not messy”).
The official word going around, primarily from Popcaan‘s camp, is that this is “fake”. However, I’m told it isn’t. I’ve personally known about the existence of this version for a couple months. In addition, Popcaan played it on his Instagram a few days ago. Krept & Konan also sampled it on their Instagram Stories while Drake was in the UK. So, this is as legit as it gets.
The question we should be asking ourselves now is… what is truly going on between Drake and Wizkid? Also, if this leak goes viral, like the leaked “Controlla” did, does it help or hurt Wizkid‘s cause? Only time will tell. For now, DJs, slot this right into your mix! Let’s keep the “Come Closer” vibe going. check it out below and share your thoughts on this version