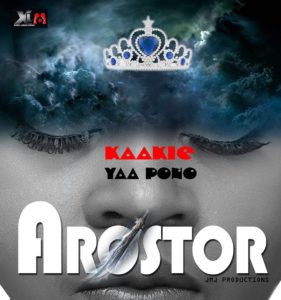 Having placed her fans on a blissful utopia with back to back hits and the rest of the competition on hyperventilation, Ghana’s finest dancehall female art Kaakie has decided to calm things down with a new slow jam titled Arostor featuring one of the most versatile artiste in Ghana in the person of Yaa Pono, the Up Town Energy records front liner. Arostor produced by JMJ is Kaakie’s ways of encouraging her massive loyal fans to ignore hater’s and march on with perseverance towards their dreams. So raise your million dollar party cups half full with arostor and let’s toast to a new era of exciting musical exposition from the Queen Diva. Cheers!