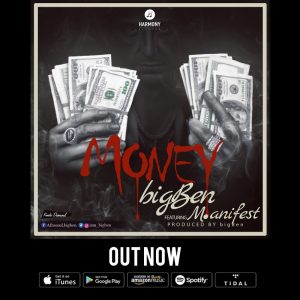 Dike Benedict Uchenna popularly known as bigBen is a music artist, songwriter, music composer, and producer/sound engineer. His involvement in music goes way back to the early stages of his life, as a young boy he occupied his time with several musical activities, joining high school musical group to being a member of a college choir. Through this He has been able to train himself in the art of music composition and also music production.
His music career kicked started in 2016 when he released his first single titled Mercy which he self produced. This song caught the attention of his current managers and label co founder Kris Azumah of Harmony Records and has signed a five-year contract.
Under his current label he has been able to release 3 massive songs titled Madina, Hadiza and Princess respectively. These songs have placed him in the lime light and has also placed him on the radar of most well known artists..
His artistic ability was able to draw the attention of top artists such as M.anifest, Bisa Kdei, Sista Afia, Criss Waddle and other mainstream artiste. Though he has the Afro fusion in music, he is so diverse that one can’t place him in a school of one genre.
As a young artist he has been able to self compose a great number of songs not released which are all of high quality and standards. At the moment he is working on he’s debut E.P that he hopes to release this year. check out Money below